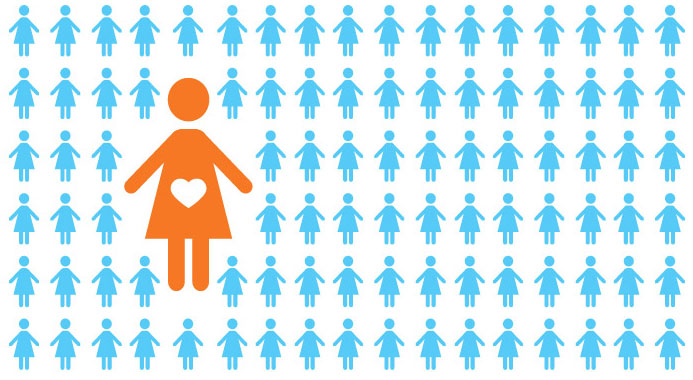 How Effective is the Marquette Method of NFP?

Let’s start with a short answer to the question.

How Effective is the Marquette Method of NFP?

For women in regular cycles, the Marquette Method of NFP is 98.4 % effective in perfect use (also called “correct use”), and 98% effective in typical use (Fehring & Schneider, 2017). These numbers are accurate for regularly cycling women following Marquette’s “monitor-only” protocols.

But what does typical use and perfect use really mean? And which of the Marquette Method regular cycles protocols are the most effective? For the full answer to that question, read on.

Marquette: It’s Not a “One Size Fits All” Method

Here’s the interesting thing about the Marquette Method of NFP: It’s not just one set of instructions.

Marquette takes a multifaceted approach to tracking your fertility. There are a number of biological indicators women can use to track their fertility, and Marquette’s system integrates the most reliable of these indicators. This allows Marquette to be adapted to fit the needs of each couple. Each biological indicator of fertility tracking that is offered by the Marquette Method is strongly supported by research as a reliable means of predicting or confirming ovulation in a woman’s cycle.

The Marquette Method of NFP offers women the option to track three different biological indicators of fertility, either alone or in combination. These three indicators are:

No matter which indicators you are tracking, Marquette’s regular cycles protocol also includes a fertility algorithm. This is a simple mathematical formula that uses a couple’s own cycle history to help identify the beginning and the end of the fertile phase in the woman’s cycle.

Marquette’s monitor-only approach is the one that most NFP-practicing couples are familiar with. Couples following this form of Marquette use a Clearblue Fertility monitor to track the woman’s urinary hormone levels (estrogen and luteinizing hormone) throughout her cycle. The monitor readings are applied to the Marquette Method algorithm, which then identifies which days are infertile, and which days are potentially fertile. It’s called the monitor-only approach because women following it do not track a secondary sign, such as mucus and/or BBT.

A third option is Marquette’s monitor + mucus system, in which the woman tracks her urinary hormone levels using a Clearblue fertility monitor as well as tracking cervical mucus observations. Information from both indicators are applied to the algorithm.

Women following the Marquette Method of NFP also have the option to track their basal body temperature (BBT). Women can pair BBT observations with urinary hormone testing and/or mucus observations.

To sum up, here’s all the variants of the Marquette Method available:

(to see how this compares with the fertile signs tracked by other methods of NFP, see my Marquette Method comparison chart.)

With so many tracking options available in the Marquette Method, you may wonder…which one is the best? Is simpler better? Or is it a case of “the more the merrier”?

Well, the research is pretty clear, but the answer to the question “Which one is better?” is more complicated than you might think.

Which Approach is the Most Effective?

As I mentioned in my previous blog post, one of the weightiest considerations when choosing a method of pregnancy avoidance is “How effective is this method?” Luckily, that’s a question that the research can answer. Because Marquette undertook research into the comparative effectiveness of three of their protocol variants—the monitor-only method, the mucus-only method, and the monitor + mucus method, we’re able to see a side-by-side comparison of which approach was the most effective.

The study, published in 2017, included 663 non-breastfeeding women who were in regular cycles (Fehring & Schneider, 2017). The goal of the study was to determine which of Marquette’s NFP protocols were the most effective for women in regular cycles. Women who enrolled in the study themselves chose which of the three Marquette Method protocol variants to follow. (Marquette’s basal body temperature instructions were not a part of the 2017 study, but were included in an earlier, 2008, study. See Fehring, Schneider, & Barron, 2008.)

Here’s how many women were in each group:

The existence of this study gives me a great opportunity to explain, using an apples-to-apples comparison, about how different approaches to fertility tracking can yield different results in terms of effectiveness—especially when you consider both perfect use and typical use effectiveness rates (as you should.)

How Effective is the Marquette Method of NFP for Women in Regular Cycles?

In total, the perfect use pregnancy rate among all the women in the study was 98.4%. This means that in a randomly selected group of 123 women practicing the method, 2 of them became pregnant, even though they correctly followed the instructions for the method they were following. Rounding to 100 women in the study, that looks like this:

The typical use effectiveness rate for the 212 women following Marquette’s monitor-only approach was 98%.

To visualize, when looking at the typical use numbers, 2 in 100 women became pregnant in the study over the course of the year while following Marquette’s monitor-only method.

As I explained in my last post, perfect use and typical use effectiveness rates are meant to be compared, and a small gap between these two rates means that most of the women in the study achieved the desired outcome (they didn’t become pregnant), even taking into account real world conditions.

To visualize, this means that 8 in 100 women became pregnant over the course of the year while following Marquette’s mucus-only approach to fertility tracking.

Mucus-based methods of NFP vary significantly in how they classify mucus and in how these observations are used to identify the fertile window. It’s so important in NFP research that the effectiveness rates are calculated for a specific method, and not just a fertile sign or general approach to pregnancy avoidance (Peragallo Urrutia et al., 2018, p. 592). There are a number of different mucus-based methods of NFP (Creighton, Billings, FEMM, Family of the Americas). The effectiveness research into one of these methods isn’t necessarily transferable to another method, because they each have their own specific way of identifying fertile/infertile mucus. Each are distinct methods, and they each have their own distinct effectiveness rates.

Here’s where it got really interesting.

People who use NFP often assume that the more fertile signs you can track, the more effective the method will be.

So…how did women who followed Marquette’s monitor + mucus approach fare? It would be reasonable to hypothesize that women who were tracking their mucus and testing their hormone levels using a Clearblue Monitor would be more successful in avoiding pregnancy than women who were only tracking one of these things.

But when the researchers looked at typical use, that’s not how it turned out.

The monitor + mucus group had a 93% typical use effectiveness rate. That looks like this:

That’s only slightly better (1% better) than the typical use effectiveness rate for women following the mucus-only approach. And it’s 5% less effective, in typical use, than women who didn’t track mucus at all and simply relied on the monitor readings.

For a visual comparison, let’s look at the results of the study, with each of Marquette’s approaches to fertility tracking stacked up side-by-side. 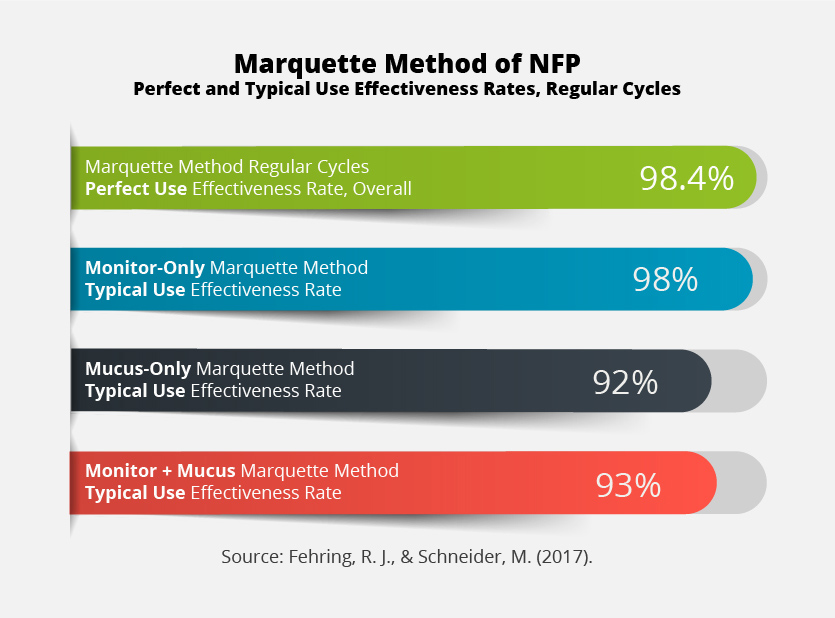 So, what do we, as NFP-practicing couples, make of these results? What do I, as a Marquette Method instructor, do with these results?

How can we explain this variance? One possibility (and this is one hypothesized by the researchers) is that abstinence is hard. As they put it, “One of the reasons why the fertility monitor plus algorithm might be more effective is that it is simpler to use, objective, and requires less periodic abstinence than the cervical mucus monitoring plus algorithm” (Fehring & Schneider, 2017, p. 48).

The monitor + mucus method was designed to be more conservative. It tends to identify a longer fertile window than the monitor-only approach. With the monitor + mucus protocol, both the monitor results and the mucus symptoms need to point to infertility for the couple to discern they are in an infertile phase. But a more conservative approach to fertility tracking does not necessarily mean the method will be more effective, particularly when you look at the real-world situation of the typical use effectiveness rate. And the research proves it.

What this study showed is that tracking mucus in addition to the monitor resulted in this group of women having more babies. Perhaps confused or frustrated by the lack of objectivity of these two measurements taken together, they prioritized one sign over the other and, at least some of the time, these deviations from the monitor + mucus method instructions resulted in a pregnancy.

Abstinence is hard. And most people will agree that abstinence that ultimately turns out to be unnecessary is doubly hard.

The more precise we can be about the actual fertile window, the fewer days of abstinence that are required, while still keeping effectiveness rates high (Fehring & Schneider, 2014). Couples that don’t have to endure unnecessarily long stretches of abstinence may well be more likely to effectively abstain on the days that really matter.

The Clearblue fertility monitor does an excellent job of measuring the reproductive hormones, and because of this, the monitor-only approach to the Marquette Method is able to identify a precise fertile window. Knowing that the monitor is providing accurate information helps couples feel confident in their identification of the fertile window. As the researchers themselves summed up in the study: “Use of the fertility monitor to estimate fertility among non-breastfeeding women provides the most secure method of avoiding pregnancy” (Fehring & Schneider, 2017, p. 43).

So, What’s the Best Marquette Method Protocol for You?

The one that meets your needs, addresses your health conditions, and fits your lifestyle the best.

Maximizing method effectiveness is certainly an important consideration, but Marquette still offers each of the different approaches to tracking your fertility because every woman is different.

My goal is to provide you with the best possible information so that you can make an informed choice about which of Marquette’s approaches to fertility tracking is going to be the best one…for you. 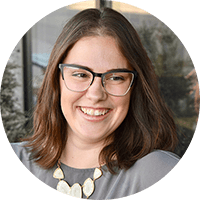 Are you considering making a switch to Marquette? You probably have questions. Fill out a free, no-obligation consultation and I’ll answer all your questions, privately and professionally.

Be the first to know when I publish a new post on the Marquette Method of NFP. 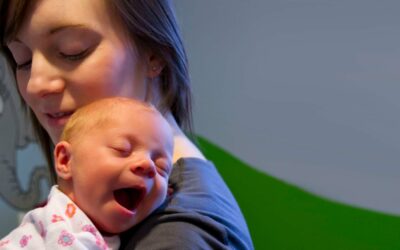 Switching from Creighton to Marquette NFP? Here’s what to expect.

So, you’re back to the drawing board… researching NFP methods and trying to figure out which one is the easiest to use and least frustrating. It’s a big decision—it’s baby or no baby—so you want to get it right. Choosing a method of natural family planning (NFP) can...

END_OF_DOCUMENT_TOKEN_TO_BE_REPLACED 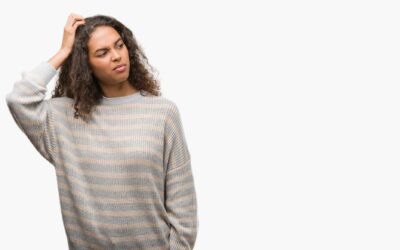 Is This My Period? A Guide to Navigating Postpartum Bleeding with NFP

You’ve got a new baby in your house. Congratulations! Maybe you’re snuggling a newborn, or maybe your baby is on the move and you’re chasing a crawler. But then, seemingly out of nowhere, you’re bleeding again. What’s up? You may be feeling confused and wondering what...

END_OF_DOCUMENT_TOKEN_TO_BE_REPLACED 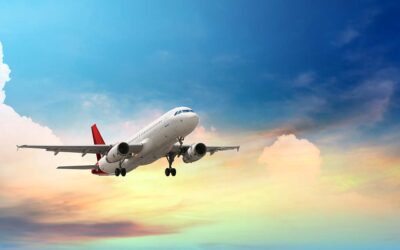 5 Tips for Airplane Travel with The Marquette Method of NFP

Recently, my husband and I thought it would be fun to take our six-week-old newborn and three other small children to Hawaii. My mom came too. I was excited to dip my toes in the warm sand and drink a few Mai Tais. I use (and teach) the Marquette Method of NFP, so 6...